After an encouraging blog post from a  friend who knows the struggle I’ve been battling regarding physical fitness, I managed to get up early Monday and Tuesday mornings to go walk. Tuesday started out well: I walked 1.88 miles in 33 minutes. Not too shabby, if I do say so myself. I was pretty pumped up when I returned to the house because my friend told me that if I can walk a mile in 22 minutes, I will be able to complete the USA Fit Half Marathon in five hours. I signed up for the half marathon in August, before I started having gallbladder problems. Discouragement set in when I had to have surgery and then struggled with nervousness regarding exercising so soon after. My friend’s encouragement meant the world to me, so I was pretty excited to be back on track.

Not ten minutes after returning home, I received terrible news. My sweet father-in-law finally succumbed to the cancer he’d been battling for nearly ten years. When I met Bill, he wasn’t much older than I am now. We both attended the same church in Houston, but had never had any reason to interact. One Sunday morning before church started, I was peering over a friend’s shoulder to read a wedding invitation she held in her hand. I am not exaggerating when I say I gasped aloud at the bride’s name. The bride-to-be was the mother of the boy I’d dated in college.  The boy I’d dated and then broken up with on less than amicable terms. The boy who broke my heart.

My friend got very excited, insisting I should go and say hello. I wasn’t too sure about it, but the boy’s mother had always been kind to me, and I finally mustered up the courage to do so. Marcia was very friendly and invited me to the wedding. I wasn’t sure about going, but in the end, I did and I’m so glad. Eleven months later I married the boy who is my ex no more. That’s a story for another day, though, because today’s story is about Bill.

Bill and Marcia met through a Bible study where they were both devoted students of God’s word. Their relationship flourished as they strove to build it upon the best foundation: Jesus Christ. Eventually, Bill proposed and Marcia accepted, and they were married on  March 23, 1991. They served in ministry together, wanting to share the gospel with all who would hear, taking it even into the prisons. Eleven months later I married the boy who had come to the Lord and became a changed man, and on that day, Bill and Marcia, AJ and I, we all became family.

That all-important word: family. There are those who might correct me, but if I had to tell you what word was Bill Rozelle’s favorite, I would have to say it is family. I can’t think of a single family meal that began any differently than this, “Father, family was your idea, and we thank you for it…” Family was so important to Bill. He didn’t have any biological children of his own, but when he married Marcia, he took her kids and grandkids for his own. When I joined the family, I truly felt I was one of his kids, too. He was always interested in what we, as a family, and we as individuals were doing.

Earlier today I talked with my daughter — she told me how much she would miss their birthday talks. I raised an eyebrow because this is something I’m not familiar with. Apparently, whenever she celebrated a birthday, he would think back to when he was that age and tell her where he’d been and what he’d been doing at 16, 17, 18 and so on. I think she was looking forward to their “21” birthday talk. 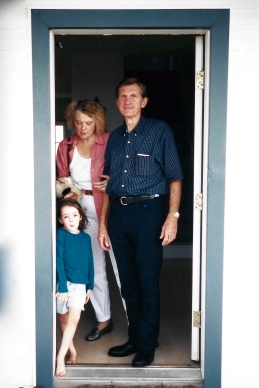 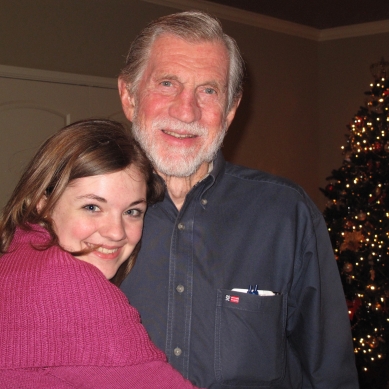 I’ll miss him scrounging around my kitchen looking for coffee fixin’s — he loved his coffee and didn’t always want to wait for the coffeemaker to brew. That’s when he’d brew up some “cowboy coffee” in a mug. The man was serious about his coffee. I’ll also miss watching him peruse our bookcases, pulling some random book from the shelf and making himself comfortable in a corner with his coffee. He loved to read and could become completely engrossed in almost any subject, no matter what might be happening around him. He truly cared about people and when my sister was going through a rough time, he always made a point to ask how she was and to say he was praying for her.

I know my husband will miss him, too. Bill loved my husband as his own son. A number of years ago, they both had motorcycles and would go for rides together. On more than one occasion, my husband accepted Bill’s invite to his church’s annual men’s retreat. A lot of the men rode, and they would all head to the retreat center on their bikes. My husband said those were some great times. Maybe he’ll go again next year in Bill’s memory. I hope so.

I’m going to do something in Bill’s memory this January. I’d already signed up in August, but there’s no reason I can’t retroactively designate my participation in Bill’s honor: I’m going to walk a half marathon. My sweet father-in-law, in his day, ran full-blown marathons. He ran in the Boston and New York City Marathons, and he ran in the Houston-Tenneco Marathon. He was a real athlete. I’m just trying to challenge myself to eat better and move more. I think he’d be proud, though. Because we’re family.

I'm a scribbler and a shutterbug. View all posts by Laura Jinkins

Let it all go. See what stays.